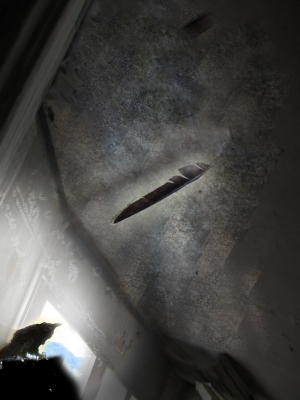 I’ve always been a text-oriented guy. What I lack in graphical skills (which is a lot), I try to make up for in prose, but there are times when I wish my skills were more evenly balanced. A little while back, I wrote a story, Shadow, that is very visually oriented. I didn’t think much more about that aspect, until fellow writer Zed Paul very wisely said “Right after reading [the story], I thought It would be great if you teamed up with an artist who actually rendered the scenes you depicted.” It was one of those moments where you realize “oh, think outside that box”

Happily, I soon thereafter stumbled onto German artist
Uwe Carow, who not only is a genuine artist (paint, sculpture, etc), but has done graphic novels before. So, now we’re in the process of putting the book together. Uwe has finished the illustrations for the first scene, and they’re great – they capture the dark, grim feel of the opening scene. That’s a taste, over there on the right, but I urge you to check out the slide show at our eventual publisher, Red Bug Books.