When we moved to London in the late 70s, there were bookstores galore. I started at Foyle’s, the famous bookshop at Charing Cross Road. It was huge, disorganized, and jam-packed with books. Their SFF collection, though, was mixed. I quickly learned to go instead to two nearby shops. To the west a block or so was the store with a name that is my mother’s favorite to this day, “Dark They Were, and Golden-Eyed”, after a Ray Bradbury story. One block east of Foyle’s was “Forbidden Planet”. 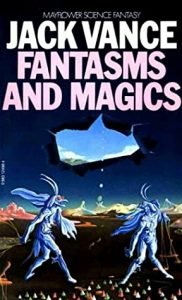 I was in heaven, and my parents, bless their hearts, encouraged me. One of the best gifts I ever got was a whole sheaf of gift certificates for Forbidden Planet. I can still remember standing in the store with my hand full of paper (gift certificates were paper in those days), figuring out just how much I could get. I picked up Jack Vance’s Fantasms and Magics (containing “The New Prime” – one of the best SF stories ever written), and Marune: Alastor 933 among other things (possibly the original Dorsai trilogy).

“Dark They Were”, I only learned this year, was managed by fantasy author Stan Nicholls, so odds are he was the first real SFF author I ever met. I don’t remember – I was focused on books, and at the time I didn’t know he was a writer. I’m not sure he was one, then. “Dark They Were” sadly closed around the time I left London. “Forbidden Planet”, founded by an ex-Dark employee, has apparently grown into a monster chain.

I didn’t encounter another bookstore that did as much for me for many years. I frequented B. Dalton and Waldenbooks, and they were good places to get books, but they weren’t really special. There was a little bookstore on the Oregon Coast called “The Book End” that had local authors like M. K. Wren, but the selection was thin. Powell’s in Portland, though, was Foyle’s all over again, but better. Just as chaotic, with used and new copies mixed in, hand-written employee recommendations, tall shelves, and only slightly better organization. I’m happy to say that, despite expansion, a branch store in Beaverton (Robin Hobb was just there), and an online presence, Powell’s has retained its magic. It’s quirky and personal, and you can find great deals there, including used books that look untouched, if you dig carefully enough.