It must be a rule of aero/hydrodynamics that the bodies most ungainly on land be the sleekest in air and water. The same thought has probably struck every person who’s ever seen a pelican fly. I spent an hour or so this morning watching a lot of them, and it’s one of the most beautiful sights you can see. Big, silly beak always tucked into the chin, floppy feet, and yet when a pelican gets in the air, it’s sleek, effortless gliding machine. 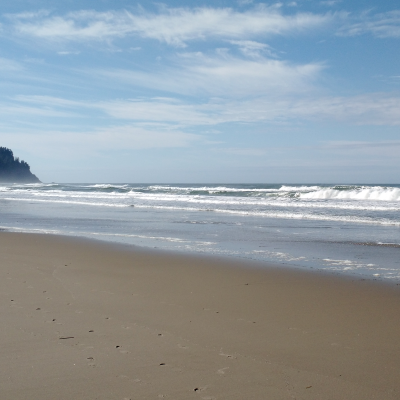 We had a rare day of sunshine here on the coast, after a week or so of our usual constant rain and drizzle. By “sunshine”, I mean the occasional flash of blue sky behind the clouds, and generally dry. In the mid-morning, the tide was out, the beach was flat, and the water was calm. There was an occasional gull flying by. A nice day at the beach – a great day, for October. 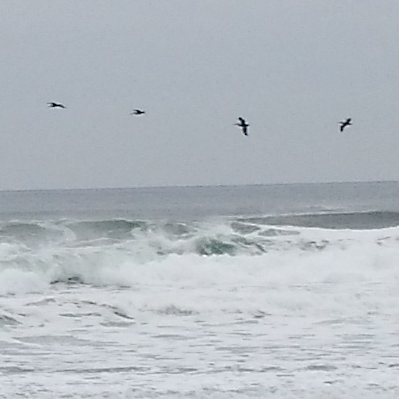 I sat for a while in a lonely spot, just to enjoy the world, and watch for seals. At first, it seemed quiet, with just a few gulls around, but then a cormorant flew within a few meters, just at the edge of the water. Soon after, a flocklet of pelicans, skimming over the water, rising and falling effortlessly. Then more of the ubiquitous geese we get stopping by the wetlands. Some murres. Then a pod of six or seven glossy seals, gliding out of the water and back in a fleeting, all-natural, chain stitch of brown fur and muscle. All headed south. Pretty soon, in fact, it seemed like every wild creature on the coast was headed south. The longer I sat, the more I saw, realizing that in addition to the dozens of passing birds, there were literally hundreds in flocks resting out past the breakers. Everywhere I looked, there were birds. And every three or four minutes, another pod of seals would stitch past.

Armed only with analog binoculars and a cell phone, I didn’t take much in the way of photos, so you’ll just have to take my word for today’s nature bonanza. As compensation, though, I offer a selection from a walk in the nature reserve on Cascade Head a while back. Trees, cool, and a startling headland meadow with across the water from a little islet covered with pelicans. I was too startled to do more than glow with pleasure at a brief close trail encounter with a coyote before he turned tail and ran, apparently just as startled as me. 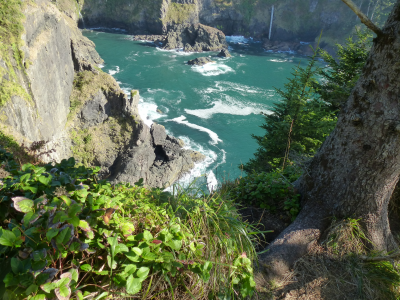 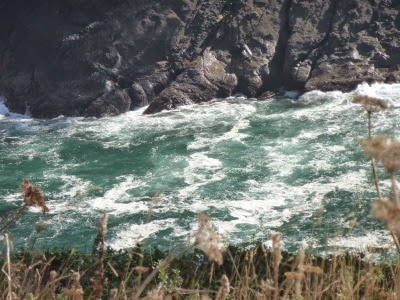 Pelicans in their awkward form