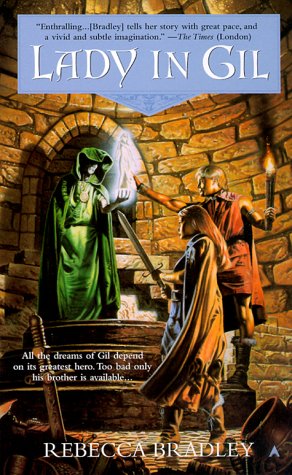 I loved Rebecca Bradley’s Gil trilogy when I read it back in 2001. Now that I’m (at least temporarily) reunited with my physical books, I picked it up again recently to find I liked it even better the second time around. That quickly led to discovery of her latest novel, a query to Ms. Bradley, and the following interview to catch up on what she’s been writing. (Hint – it includes more Gil!)

Rebecca Bradley published the very well-received Gil fantasy trilogy (Lady in Gil, Scion’s Lady and Lady Pain) in the late 90s . Gil was followed in the 00s by a horror novel ( Temutma ) with Stewart Sloan and a book of “apostate’s bible stories” ( The Lateral Truth ). Now she’s back at last with a new novel set in the Stone Age ( Cadon, Hunter ). She blogs at The Lateral Truth .

You’ve done a lot of different things, from archaeologist to writer to technical editor. How do you describe yourself now?

Crazy chicken lady. That’s like being a crazy cat lady, only with chickens. But also cats.

That is to say, my husband and I “retired” to a rural acreage in the Kootenays, British Columbia, theoretically to enjoy pottering in the garden while writing full-time. In practice, the acreage-related chores take up a fair amount of each day, and have their own charm. I am by turns a woodchopper, amateur carpenter, woodstove-cajoler, digger of ditches, chicken-poop-scooper, bear-frightener, and preserver of daunting floods of apricots, plums, and the vegetables we so intemperately plant in the garden, plus the performer of scores of other tasks I never dreamed I’d ever do. That goes double for scooping the chickenshit, though the chooks themselves are adorable. The acreage and I, however, have lately drifted towards a reasonable compromise, and writing has moved back towards the front burner.

What originally brought you to writing fiction?

Like most (or maybe all) writers, I was always a passionate reader, and spent my adolescence writing terrible poetry. Then university took over, and I mercifully dropped the poetry, though never the reading. Archaeology absorbed me up to the point where I was finishing my PhD thesis in Northern Ireland while also producing two entrancing babies—and somehow, perhaps because there was not already enough for me to do, I chose that moment to bow to the inevitable and start writing fiction. 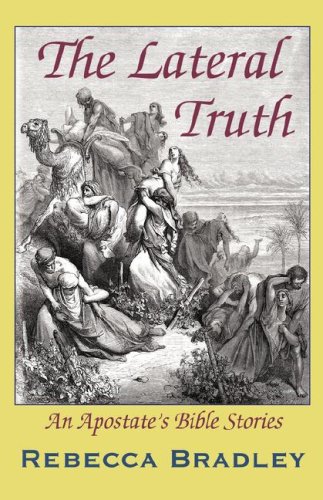 You describe yourself as a ‘natural born atheist’. Your Gil trilogy incorporates an actual, functional deity, but the second book (Scion’s Lady) also deals with cults that spring up and vanish overnight. How have your own beliefs affected your fiction?

Fiction is fiction. I’m a hard-nosed rational materialist in life, but fully and joyously capable of suspending disbelief in the supernatural for the duration of a good story, whether I’m reading it or writing it. What I do find quite dull, however, is the phenomenon roughly described as “spirituality,” possibly because I have not a spiritual bone in my head. I do like a dash of irreverence in what I read as well as what I write, as witness my volume of stories following Biblical themes to their logical conclusions. [The Lateral Truth: An Apostate’s Bible Stories.]

While the Gil trilogy was very well received, your other fiction is limited to a few short stories (and now a new novel). Why the long silence?

Well, I never actually stopped writing. While we were living in Hong Kong, though, from 1991 to 1996, I was able to write fiction full-time, and produced really quite a few words—including 2/3 of the trilogy and another novel: Temutma, a vampire/police procedural co-written with Stewart Sloan and published by Asia2000. Then we moved home to Canada, and I got jerked back into involvement in archaeology, including teaching at university level. So, I spent a lot of time writing teaching materials and some scholarly stuff, with short fiction and creative nonfiction as the filling in the sandwich. I also wrote a number of noncredit courses on subjects that interested me, like pseudoarchaeology, the collapse of complex societies, messianic cults, Pharaonic Egypt, and (of course) creative writing. Cadon, Hunter was started over a decade ago, but repeatedly put on hold until I ran out of excuses.

The Gil trilogy was published in the late 90s and early 2000s in hardcover and paperback. Your short stories also appeared as paperbacks. Have you thought about reissuing these as ebooks? 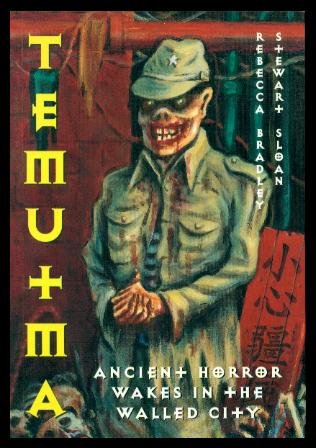 Absolutely. In fact, I’m working on this now. The trilogy is pretty straightforward, but the short stories fall naturally into several categories, so I’m repackaging them accordingly into several volumes. Straight horror, soft sf, Hong Kong stories, and a volume of novellas and short stories set in Iklankish, a place that appears prominently in the Gil Trilogy. Some have been previously published, either in my own collections or in edited volumes like Tesseracts, but a bunch of them are new material. As for Temutma, Stewart Sloan and I are planning to put up the English-language ebook, and Jurgen Burger, who did the German translation, is shortly bringing out the German ebook under his imprint, Spray Books.

You blog regularly at The Lateral Truth, part of the Skeptic Ink Network. What issues do you deal with, and what’s your objective in writing there?

Skeptic Ink is a loose confederacy of bloggers writing about all manner of things from a skeptical/agnostic/atheist perspective. I applied to join when it started up because (a) I liked the idea of getting my work out into the world on my schedule, rather than a publisher’s, and (b) I had a lot to say about what I consider to be popular sociocultural nonsense, and a blog network is a great platform for being bossy and opinionated. Pseudoarchaeology, critique of religion and current social issues, book and movie reviews, news and views, series on prophets and messiahs and political correctness and science and…well, all sorts of stuff.

Just recently, in the last week of May, you published a new book, Cadon, Hunter, set in the Stone Age. What’s it about? How does it draw on your background as an archaeologist? Is it a solitary, or will there be more in that environment?

Cadon, Hunter does draw extensively on my background in archaeology and anthropology, but it is heavily seasoned with the fun and freedom of fantasy. That is, I was not trying to write a serious, scholarly reconstruction of the Mesolithic world—rather, I wanted to construct some archaeologically plausible ancient cultures, and then let them collide in an entertaining fashion, like Gomez Addams’ model trains. It’s set at that pivot in time when late Stone-Age-style hunter-gatherer bands continued to subsist beyond the borders of early state societies. Of course, there’s also a side-swipe at the origins of religion. Some of the inspiration is lifted from the Epic of Gilgamesh, and yes—at least one more volume is planned, as this one really only sets up the Gilgamesh connection.

Everything I’ve published so far can be loosely described as “speculative fiction,” or historical fiction with fantasy elements, but those genre boundaries are pretty flexible. I like that freedom to play. On the other hand, there are certain types of writing I would neither read nor perpetrate: specifically, no navel-gazing postmodern post-narrative experimental purposely impenetrable and unreadable high lit. I am, first and foremost, a lover of good narrative.

What do you read for fun?

Oddly enough, I don’t read much fantasy and science fiction—except recently, when I was on the panel of judges for the Sunburst Award, and had to evaluate scores and scores of spec-fic books over a period of few months. Free books, whee!

By preference, however, I read mysteries and classics, am a confirmed Janeite and Thackeray freak, and have a weakness for the early-to-mid 20th century—E.F. Benson, Booth Tarkington, Sinclair Lewis, Somerset Maugham, George Orwell, H.G. Wells, Dorothy Parker, etc. I adore short stories of any genre. Otherwise, it’s nonfiction for me, especially history, true crime, and anthropology. I am a sucker for anything to do with serial killers, psychopaths, the Third Reich, disasters, cults, shipwrecks, and the history of religion.

In the United States, atheists are among the least trusted groups. In Brazil, atheists rank with drug addicts in the public mind. In other countries, atheists face severe restrictions. There’s even a term for fear of atheists – atheophobia. Why do you think so many people are troubled by atheists?

Well, there’s that strongly held religious claim to the high moral ground, on the basis that all morality must come from some god or other. Which is bullshit to begin with, and also a confusion of morality with religious/cultural taboo. Look at what some religions consider moral and even laudable (suicide bombing, bigotry, gay-bashing, censorship, stoning) and what some religions consider immoral (boobs, booze, art, pulled pork, music, thinking) to get some idea of how the gods can’t get their act together. Whereas, it seems very likely to me that a core morality based on empathy and a sense of what’s fair is hardwired into the 90-95% of us with a reasonably functioning cerebral cortex. In fact, there’s nothing like religion to override our hardwiring, and make people willing to behave monstrously. And as religion is also a major tool for populace control, those of us who see the emperor as naked may well be perceived as a threat to the social order.

Does the publication of Cadon, Hunter mean that you’re back to writing, or should we expect another 20 year gap? What’s next?

Heh. Given my age, I don’t think I can afford another 20-year gap. And don’t forget I’ve written the equivalent of a nonfiction book or three in the form of blog posts over the last few years. But if the question is about a return to long-form fiction, then yes—I’m about 20,000 words into another ancient-world fantasy/horror (with a strong supernatural element), and am building up a pile of notes for the companion volume to Cadon, And I’ve recently been dusting off the first chapters and full outline for a followup to the Gil trilogy, which is set about twenty years after Lady Pain, and has coincidentally been reposing in my bottom drawer for almost twenty years. Feels like the right time to get that puppy down on paper.