I saw my first total solar eclipse in Madrid, when I was 6 or 7. It was at school, and we all gathered outside with our bits of exposed film to protect our eyes. It was impressive, and my memories are extremely clear.

Except that I looked it up, and there wasn’t a total eclipse in Madrid in the ’70s. There were a couple of partial eclipses, though perhaps not on quite the right schedule. I can’t explain it, but I remember.

My family is, at the least, well prepared. My wife and I now own a house in a little Oregon beach community, right in the path of the 2017 eclipse. And though we reluctantly moved away for work at the start of the year, we booked our flights home in early spring.

Suffice it to say that this morning, eclipse day, we had so many pairs of eclipse glasses that we were able compare relative darknesses, and each use a pair that seemed best suited to the conditions. And it’s not that others were going wanting – neighbours up and down the street were handing out extra pairs for free.

As to those conditions… Our little village is situated in an almost permanent pocket of fog, with mists rolling down off the headland to the south, trapped by hills to the east, amplified by wetlands to the north. It’s cloudy here a lot, though climate change has seen a shift toward more and more frequent sunshine – yesterday was clear and blue. Today, however, the village lived up to its history – fog all day.

And, actually that wasn’t bad. It’s true that there was an unfortunate gap between ‘too dim to see the sun with eclipse glasses’ and ‘too bright to see with sunglasses’. And that my random ‘point the smartphone where the sun should be, if I could see the phone with my eclipse glasses on’ photos just show a round ball of fog-diffracted light instead of what I know was a mostly eaten sun. But when the moment of totality came, the silvery mist against the pines added an eldritch quality that made the moment even more magically Oregonian.

The totality was impressive – a bright and shining ring against the shimmering grey of the clouds – but the moment when the sun first peeked back around the moon was stunning. I spontaneously started clapping, as if nature had pulled off some awesome piece of performance art. Which, in truth, it had.

Beauty is in the eye of the beholder, and we beheld. We got more than an eyeful. And then, when beholding grew too great, we put our film and cardboard filters back on, and beheld a little more. Far from impeding our enjoyment, that classic Neskowin cloud just made it all the more beautiful. 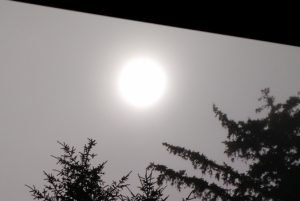 My photos don’t do the event justice – they’re like a third generation mimeograph of a Brueghel painting, and they all look the same – before, during, after. But I include one here, if only to show that sometimes, memory is better than truth.