Since my writing career is so neatly encapsulated by the 2010s, I thought I’d take a look at some more detailed statistics. Note that the overall picture includes all my submissions, not just 2010s, but the difference is trivial. 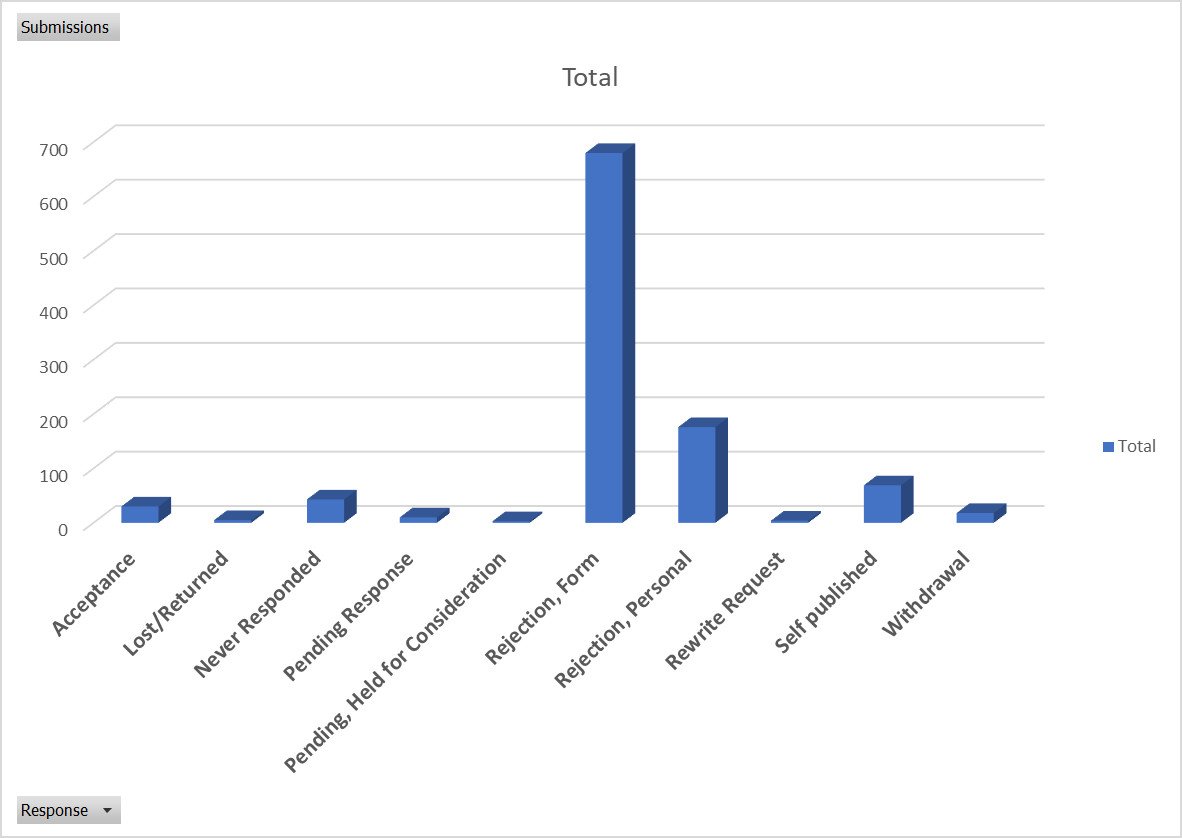 Overall, I sent over 1,000 submissions, and got 30 acceptances: 3%. About 83% of submissions were rejected (17% personally). While there are a number of withdrawals listed, I rarely withdraw stories, so I suspect that includes some grey areas. About 5% of submissions never got a response.

Of 102 stories I sent out, 27 were eventually published – 26%. I also self-published about 40 stories – mostly because at one point I wanted to just clear the decks. Because most were published twice – in one of three collections and in an omnibus, the first chart isn’t quite correct.

Over the whole period, I’ve made just over $2,000 from sales to venues (not counting self-published book sales).

Here’s a year by year chart – for my entire writing career, which, as previously noted, is desultory until 2010. After that, I average about 79 submissions per year.

I self-published a trilogy of collections in 2013 and 2015 (brought together in Allenthology), largely because I was frustrated with stories that I thought were good but that had been submitted multiple times. I wanted to get those stories out of the way, and have more of a clean slate. That may have been a mistake, because repeated submission (and sometimes revision) does work.

I don’t know what the magic number of submissions is. One story (that I quite like) has been submitted 30 times, a number of others 20 or so times each. Some stories were submitted only once, and accepted immediately. Of 102 pieces I sent out, 27 were eventually published.

Stories were out an average of 50 days each before responses. Average time for acceptances was 88 days. Sometimes, a long wait is good – though usually not.

Average time from acceptance to publication was 214 days, but there were some major outliers (781 and 699 days). With those removed (there were still some 400+ day waits), the average is 172.

For what it’s worth, I was in my early 40s when I started the decade (and all this writing). I’m in my early-mid 50s now.

I submitted to a total of 315 markets – 179 of them only once each. Other markets were oversaturated with my submissions. My highest rates of submission were to (no acceptances!):

Of my top markets, F&SF had by far the highest percentage of personal responses, at 71%. Ironically, that slowed my submissions to them, because I a) put some pieces out of commission pending revisions, and b) really wanted to submit only stories worthy of the market. I didn’t always hold true to that, sometimes submitting out of desperation because it had been a while, but overall, I grew more selective and tried to send F&SF only my best. In short, Charlie Finlay is a treasure.

Beyond even F&SF, though, Beneath Ceaseless Skies gave personal feedback on a whopping 83% of submissions, Cosmic Roots and Eldritch Shores on 82%, Diabolical Plots on 57%, EscapePod on 45%. There are others, but the samples get too small to be reliable. However, the above venues deserve a lot of credit for doing the hard work of giving feedback. Send them your best!

What it all means

To reprise a theme from an earlier post: at the start of the 2010s, I expected more. I didn’t expect to be a household name, but I thought I’d have an award or two by now. My stories would be in the top magazines. I might even have a traditionally published story collection. None of that happened.

Why not? I learned that I’m a terrible self-promoter, and that I’m not great at producing what venues want. The pieces I like most are rarely the ones that sell. Also, of course, I’m probably just not as good as I think I am. The venues that turn my stories down may just be right (though of course I stand by my stories). The overarching theme of comments I’ve received – in person and in response to submissions – is: you write beautifully, but your stories don’t do it for us. I suspect that it boils down to: “good writer, poor storyteller”. A sub-theme has been that my stories move slowly, but I’m okay with that.