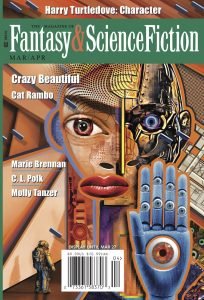 Conscious or unconscious, realistic or fantastic, we all have goals of one kind or another. My goals as a writer have always been fairly understated, and more a background “that would be nice” than a true ambition. But I’ve just reached one of my summits, and it feels pretty good.

I’ve written before about how I came to science fiction and fantasy, and the role of Ms. X – the middle school teacher who gave me her boyfriend’s old pulp magazines: Analog and F&SF. I was immediately enthralled, and read everything I got. I still have some of them, too.

I didn’t think about writing at the time; I didn’t think about it for decades. When I did, though, I found that somehow, without volition, I’d developed a goal – publishing a story in F&SF. I don’t know why F&SF. The stories in Analog were just as good, or maybe better, overall. And when I tried to revisit F&SF, in the 90s, I wasn’t so enthralled. But I found that F&SF was where I wanted to publish. That was only enhanced when I met C.C. Finlay at the 2015 Spokane WorldCon, and he turned out to be a nice guy. In any case, F&SF had become my definition of success. The fact that Charlie turned down story after story didn’t daunt me. (Well, not for too long. Sometimes I gave him a break from the submissions.)

You know where this is headed. I sold a story to F&SF, and it’s in this month’s issue! I sold it last year, while C.C. Finlay was still around, but it was edited much later, and comes out in Sheree Renée Thomas‘ inaugural issue as editor. I’m assuming that means they both liked it. I hope so. Doesn’t really matter, though. I’ve been published in F&SF. For whatever reason (uh… maybe the great authors that have been in it over the years?), that’s been my goal, and now I’ve made it. It’s exciting.

The story itself is “Minstrel Boy Howling at the Moon”, with its title stolen from a great song by the late Jimmy Le Fave. I thought it was a fantastic title – so much so that I felt I had to write a story from it. The story is set in the fictitious town of LeFave, Oklahoma in his honor, and draws on his lyrics for some of the concepts and imagery, and 100% for inspiration.

So that’s done. I’m just not sure what to do now. I’ve never really dreamed about selling a novel. I’m all for it, to be sure, but that’s not my dream. My dream was selling to F&SF, and I’ve done it. Maybe time to go back to sleep and dream up something else?